It would have driven Descartes crazy. And if that didn’t do it, this real quote would have made him ready for Thorazine, in industrial strength:

“Typing is an antiquated input method….”

Easily dismissed as just one more Tek booster flogging the alleged greatest and latest. After all, don’t we all know that when the crowd is sourced, it’s never wrong? That pronouncements of Star-Tekers are never wrong? Certainly they got it right predicting in the 1960s that we’d all be using self-driving flying cars by now.

It’s scary and creepy and just a bit sick-making, because it shows in nuce what’s so wrong these days. Fast faster fastest. No time for words or even, gasp, emoji. Save time…just use a picture.Take the Mona Lisa. Please. Nice but hardly the best da Vinci, let alone Renaissance painting. Now, smart sage, tell me what amount of antiquated inputting it’s going to save me? I’m game for anything which could save me the trouble of finishing my current five hundred page (and counting) manuscript.

But I’m going to expand my case with something even simpler, and older, than emoji. Dingbats, aka printers’ ornaments. Hermann Zapf’s are justifiably famous; they first appeared in 1978. But therein lies a tale. Back in the 1990s, doing good typography  on a computer meant using Adobe Postscript fonts for “desktop publishing” as it was called then. Postscript fonts were not an open format, Postscript-enabled printers were ruinously expensive. Adobe had licensed the Zapf Dingbats. In short, if you wanted Zapf Dingbats on the computer, you were going to pay. Generously. Then Microsoft decided to take on Adobe by devising  TrueType, a format publicly available. Obviously Microsoft couldn’t license the Zapf Dingbats since Adobe already had done so. In consequence they made their own dingbat font, WingDings (1990)to be released with Windows 3.1 (that was the release before Windows 95). Incidentally, this gave rise to Bill Gates’ famous “I made John Warnock cry” remark [John Warnock was a co-founder of Adobe].

Now in medias res. In Wingdings, each dingbat can be accessed via an alphabet character. And then, someone discovered that if you input NYC you get:

And lo, the conspiracy theories began. “Death to the Jews” became an online buzz long before Twitter or the concept of “going viral” had been invented. Apart from the absurdity of it (Why would Microsoft want to have such a message? Was Brad Silverberg losing it?), no one had considered that it could just as easily have meant “A Jewish physician can save your life.”

See for yourself. Apply to Sergey and Larry with “nyc wingdings” and you can peruse ad nauseam. What all these theorists err is thinking there was meaning in such a random event as producing the Wingdings. James Thurber skewered such an idea beautifully in his “The Luck of Jad Peters” (The New Yorker, 12-8-1934). So did Martin Gardener in several of his Dr. Matrix columns for Scientific American. I may do a post on all this if I can get the math under enough control so as not to frighten the math-phobic.

The skull-and-crossbones, for example, has traditionally meant a pirate (ship) or on a bottle, poison. 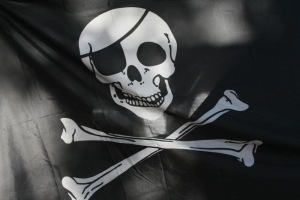 But consider. There are poisons and poisons. Most household poisons can definitely make you sick and perhaps damage your internal organs…but with medical assistance, you probably won’t die. Unlike cyanide; you need medical assistance very, very fast. You see the ambiguity of the skull-and-crossbones? Pictography, whether in emoji or Dingbats, is inherently ambiguous. Suits the needs of pre-industrial societies. But when society needs accuracy, pictography won’t cut it. Pictography can form the basis of an alphabet as a syllabary, that is one syllable per image, collections of syllables make comprise a word. Chinese is a wonderful example.

But as for pictures replacing keyboards…No can do. Yes, my sarcasm is showing. Commonplace symbols are ambiguous. People have argued for centuries about the meaning of the Mona Lisa. And even the woman’s identity; the great E.H. Gombrich once waggishly suggested Cesare Borgia in drag. So yes, I take that Tek Troll very very seriously. His ideas need vigorous rebuttal. He’s not taking any prisoners and neither should we. Unless we want a world of no thinking, no writing, not even communicating, but staring at the pictures, pretty or otherwise.

There’s a word for that.

For a better da Vinci try his Ginevra da Benci from the National Gallery, Washington DC

2 thoughts on “I keyboard, therefore….”

Follow Usual Cultural Pursuits in the Internet “era” on WordPress.com

photography, writing and the spaces between

A cross-contour drawing uses lines that seem to move along the surface of the objects in the composition. These lines emphasize the volume of the objects by wrapping around them.

Learn how to draw and paint dreamy beautiful feminine faces with acrylics, in any skin tone.

From an Information Design Perspective

A daily selection of the best content published on WordPress, collected for you by humans who love to read.