Probably nanoseconds in Internet time. Couple weeks back I found a very interesting illustration of ruined ancient structures as if they still existed intact in today’s cities. Hanging gardens of Babylon, Inside the Temple of Zeus at Olympia and more, including…the Parthenon. Grab that image and tweet it. Q.E.D. = “Quite Easily Done”. But then the Favorites and retweets started coming in. No, make that pouring in. Or, changing the metaphor, a thundering herd. I’ve never had more than single digits of either Favorites or RTs, and often wondered what it would be like to have a really popular post. My education needed expanding. And it was. Oh my, how it was.

“Be careful what you ask for.” Usually I tweet thank-yous to the nice people who retweet or favorite one of my tweets. But twenty favorites in one morning alone makes for paralysis. Some added comments (infra) but sometimes those comments were in languages that I don’t read [I do read, of the modern languages, English, French, German, Italian; never mind the dead languages for now]. Maybe their comments were “this is the stupidest tweet I’ve ever seen.” Or worse.

I started to wonder how the crowd with six and seven digit numbers of followers cope. Not for long. Each morning brought a new onslaught to my innocent posting. Finally quiet reigned in my Twitter notifications, and you can see the final numbers here:

I thanked everyone who made substantial comments which I could read. There were several common themes.

More than one person noted that Parthenon’s friezes were white rather than in colors. Good catch! We classicists have known for years that the Parthenon was painted from flecks of paint on the stone. But very recently, advanced imaging techniques have produced far more color evidence, and not just for the Parthenon. Two examples: 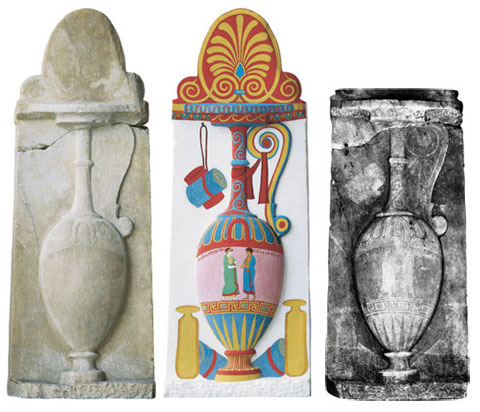 Scholars have known for a very long time that Greek sculpture and architecture was painted from minute traces of paint thereon. But in the last decade new imagining techniques have made reconstruction possible. The second picture shows a Greek stele (tombstone), left to right: original, colored and a b/w which shows the kind of information that can now be found. It comes from a wonderful Harvard exhibit; you really should look at the other pictures here. The first picture shows how the Parthenon probably looked in the fifth century.

Garish, n’est-ce pas? Do that in an intro painting course and with luck, you’ll be toast; without luck, extremely dead. But what about all the “white classical purity” of the “noble Greeks” who believed “nothing in excess; know thyself”? Hah. Gone, because it never was and they never were…but that must wait for an upcoming post.

Several carped about the arrangement of the buildings, that some of the other Acropolis were in the wrong places. Well yes they are. But this wasn’t an illustration for a book; it was part of a calendar advertising campaign; see the other illustrations here. In portrait orientation, you just can’t get the whole Acropolis in and still have the modern city unless the former is way, way, tiny. So get real.The posters seemed to think that painting and illustration is supposed to be photographic. Perhaps they were thinking of this Renaissance painting:

But compare it with just two other Renaissance paintings whose perspective is rather…singular:

And as for building inaccuracies, no real cafe could stay in business long if van Gogh had turned architect:

[Aside: The Yale Art Gallery was just around the corner from my residential college. It was a rare week when I didn’t commune with it]

The visual arts are rather like poetry, on whichW. H. Auden remarked “poetry is what is lost in translation.” I rest my case.

But most commenters simply enjoyed it, as I did. I’ve not dared to ask my fellow classicists their opinions. Because the results would for the most part by nattering, niggling, and nit-picking…the last-name is surely best left to the simians. This is the crowd who still carps about Robert Graves’ wonderful novels I, Claudius and Claudius the God. Why…because Graves is rather free with his primary source, the great Roman historian Tacitus. Likewise for the wonderful television series of that name.  Some people just don’t know how to have fun. Nothing like being cross-threaded with most of your profession, is there?

Follow Usual Cultural Pursuits in the Internet “era” on WordPress.com

photography, writing and the spaces between

A cross-contour drawing uses lines that seem to move along the surface of the objects in the composition. These lines emphasize the volume of the objects by wrapping around them.

Learn how to draw and paint dreamy beautiful feminine faces with acrylics, in any skin tone.

From an Information Design Perspective

A daily selection of the best content published on WordPress, collected for you by humans who love to read.